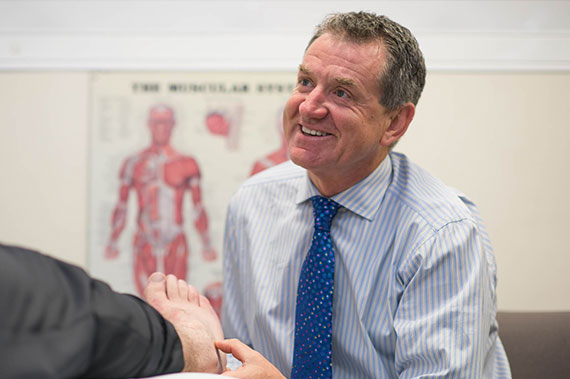 His current practice deals with all areas of health, fitness and exercise including sports injuries and a wide range of orthopaedic and musculoskeletal conditions. He has extensive experience in clinical, administrative and team based care of the active individual regardless of age. He has a special interest in adolescent and older aged care as well as elite athlete groups.

Dr Larkins has degrees in Medicine and Medical Science (Exercise Physiology), and has undertaken post graduate studies in sports and exercise medicine in Canada, USA, England and East Africa. He has been an invited speaker at numerous international conferences including teaching at International Olympic Committee doctor training courses.

He is a former National President of Sports Medicine Australia (SMA), the peak advisory body on health and fitness in Australia. He has also been National Vice President of the Australasian College of Sports Physicians (ACSP) and served on many administrative committees and working parties for Government and professional health, fitness and medical organisations over the past 25 years.

He has also served as team doctor with a wide range of sports including the Australian track and field, cricket, triathlon and lacrosse teams at World Cup, World Championship and Commonwealth Games events. He has also been a team doctor for both Geelong and Adelaide football clubs in the AFL and was a senior Team Leader for the provision of medical services at the 2000 Sydney Olympic Games.

Peter is a regularly invited speaker and author on topics related to health and fitness. He has a corporate speaking business which addresses all aspects of healthy living and the role of physical activity in the promotion of health and well being, together with the enhancement of productivity in the work place.

Peter has had extensive media involvement including regular appearances on television, radio and in newsprint on issues related to sport and health.

Peter’s interest in sport and fitness began with his own sports career involving athletics, football and cricket. He has represented Australia as a competitor in middle distance running at Olympic, Commonwealth and World Cup competitions and been captain of the Australian track and field team in 1983.

Peter is a former long serving member of Epworth‘s Medical Advisory Committee and is currently Lead Clinician for Sports Medicine and Member of the Executive Committee of the Epworth Healthcare Musculoskeletal Institute.