“Doc, I’m not feeling well today, I’ve got a bit of cold. Should I go to training?”.

This is a question I get asked commonly working with athletes at both the elite and sub-elite levels. To train and/or compete during an URTI is one of the many challenges faced by both the sportsperson and sport and exercise physician. In this article, I will discuss what happens to our immune system during exercise, highlight some of the current literature surrounding this topic and share some practical tips I commonly use in my practice when faced with this dilemma.

What happens to our immune system during exercise?
During exercise, we switch from nose breathing to mouth breathing. This may result in increased deposition of harmful particles in the lower respiratory tract. It also causes the mucosa (lining of the respiratory tract) to dry out, which in turn slows down ciliary movement (a mechanism for clearing harmful bugs) and makes the lining more sticky1. Immediately after moderate to high intensity exercise lasting less than one hour, there is an increase in our virus fighting cell count and cell activity2,3. However, these fall below pre-exercise levels within the first two hours following high intensity exercise2,3. While there is also an increase in other immune cells during acute moderate physical activity, these too temporarily decrease following bouts of intense physical activity3,4. This brief period of immunosuppression after acute intense physical activity results in an immunological “open window” whereby a sports person may be  more susceptible to infection1-4.

What evidence is there on this topic?
While the results are conflicting, there is some evidence that intense training is associated with higher levels of infection4,5. Nieman has proposed the J-curve, which hypothesises that regular moderate intensity exercise decreases the risk of URTI’s compared to sedentary individuals, while strenuous intense exercise increases the risk of URTI’s (Fig 1)6. 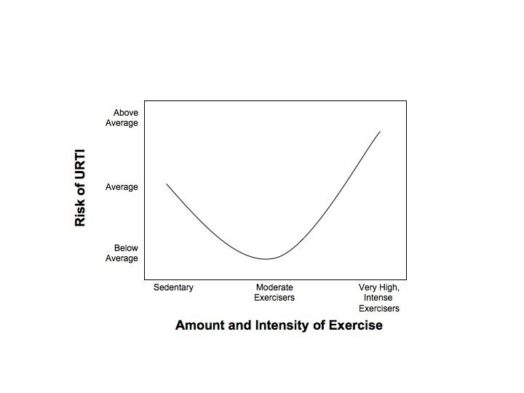 Several papers support the Nieman J-curve hypothesis that moderate, frequent aerobic exercise lowers one’s risk of developing an URTI, while bouts of strenuous, high intensity exercise may increase ones risk7-11. Other studies looking at elite swimmers and long distance runners failed to show any clinically significant correlation between load, intensity and related illness12,13. The exact frequency, duration, type and intensity of exercise required to optimally reduce or increase ones risk of infection is yet to be determined5. Performing intense exercise during an infection has been associated with increased risk of heat exhaustion, post-viral fatigue syndrome and viral heart inflammation14-17. There is no evidence that exercise will affect the duration or severity of an URTI in fit and healthy people18,7.

Will my performance be affected if I play/train/compete with an URTI?
Infection is commonly used to explain poor athletic performance. Infection may compromise optimal muscle function. Exercising when ill also requires greater effort from our heart and lungs, which in theory may result in reduced performance or work capacity5. In one study, elite long and middle distance runners reported a higher perceived training intensity while ill, however there were no objective measurements to back this up. Another study in elite swimmers did not show any meaningful drop off in performance during competition in those with an URTI in the month leading up to competition19. Another study in elite swimmers reported that although, on average, the harmful effects of training while ill was trivial to small, the chances of harm to individuals was significant20.